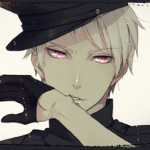 Silver is Akari's Assistant and a Combat Physician at the First Ship of Circus.

Silver was the one who gave both Akari and Tsukitachi their ties. Akari a more proper one since it suited him more and Tsukitachi a more sloppy since he is never serious about work.

She has a weak body and gets fever very often.

She normally has around 2 to 4 Teez following her around.

She loves playing cards and poker.

She distrust other persons due to her past but she can feel compassion and empathy for those she love.

Since her childhood was hard she has a hard time to understand love and sometimes ask her brother Tokitatsu what she should do to make Akari and Tsukitachi happy, normally he advise her to due something perverted which ends happily with Tsukitachi but Akari becomes angry and start to complain to Tokitatsu not to teach her stupid stuff, he encourage her to do what she feels is right, Tsukitachi becomes happy either way.

She doesn't like to show Akari that she's been hurt since he make a big deal out of it.

She can appear very sadistic when she fights, bur she doesn't fight often since that take a lot of her strength.

Silvers lover, he say that he doesn't take interest in women but find Silver the only exception. He tends to be very over-protective of her. She doesn't like to show Akari that she's been hurt since he make a big deal out of it.

Silvers lover, she loves his good-humored, and not taking matters very seriously. He tends to be very over-protective of her.

Silver likes to call him Tsuki.

Silvers older brother, he tends to be very over-protective of her. Silver also cares for him deeply. They have a great sibling relationship. He has a sister complex.

She likes to call him Toki or Aniki.

Silvers older half-brother. They don't have a good sibling relationship.

She can heal others from physical or mentally pain, such as a wound or take stress away (which she mostly do to Akari). She is also very good a massage but does only that to Akari and Tsukitachi.

She uses cards to turn into Flesh-eating butterflies.

She uses them in battle and to help her spying.

She uses her legs to attack enemies. She is on of the best at Hand-to-Hand Combat.

Like most of the Circus members Silver can fly at a certain speed though it has yet to be shown if her ability has certain limits.

She needs to insert blood in her system in order to survive. Different blood types give different results but the one from the same blood group is the best. She gets the blood from Akari and Tsukitachi, since they have the same blood type and care for her deeply.

She was used as a test subject by the Research Tower since she was born with high traces of natural Teez cells in her body, simply saying her body possessed the cells of the Teez origin. The Teez was creatures from long ago that ate Incure Cells and are therefor a enemy toward Varuga, but the Teez cells are rare and has so far only been discovered in Silver. The experiment was to use her as a test subject since to high traces of natural Teez cells are unusual. But due to this experiment it made her body weak and slowly dies, due to the fact that her red blood cells won't reproduce so they dies.

She was cast aside and returned to her family but the time at the Research Tower was hard for Silver and because of this experience she started to distrust other persons. So she didn't trust her family, the one she warmed up to was her brother Tokitatsu.

12 years ago (14 years old) she began studying the Medical Course in Kuronomei Academy with Tsukitachi and Hirato when they were in their teens. They met Akari then, since Akari was already doing his research when they were in school.

At some point Akari took a interest in Silver and told her that he would help her with her exhausted body. She would later be personally trained by him.

At some point when Silver went to Kuronomei Academy she fell in love with both Akari and Tsukitachi.

Retrieved from "https://karneval.fandom.com/wiki/User:Preussen_Gilbert?oldid=9861"
Community content is available under CC-BY-SA unless otherwise noted.