Start a Wiki
A Niji is a rare, little forest creature that resides in the Rainbow Forest and are considered an endangered species. Their main diet consists of insects, and they have a superb sense of hearing that allows them to pick up on sounds deemed inaudible to others as well as empathetic abilities. According to Dr. Akari, no one has ever been able to successfully keep a Niji alive in captivity. 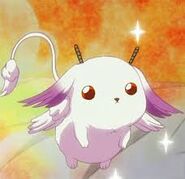 Add a photo to this gallery
Nai is a half Niji. It is claimed whoever created him is a "genius." He is such a valuable specimen that when he was discovered, they all thought about dissecting him.
Retrieved from "https://karneval.fandom.com/wiki/Niji?oldid=10101"
Community content is available under CC-BY-SA unless otherwise noted.